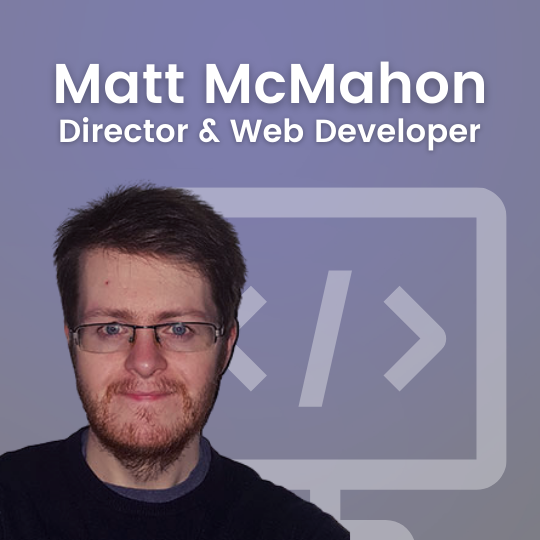 Matt McMahon is one of the co-founders of E2E Studios. Computers caught his interest during primary school: the classroom computer, an old Windows 95 machine, introduced him to word processing, basic digital design and the Internet itself.

He spent his teenage years learning how it all worked, utilising this knowledge to create and host fan sites for online gaming communities. This, a brief stint at college, as well as freelance and salaried employment at various companies, introduced him to the fundamentals of the Internet: how computers are connected to each other, how the packets that comprise information are routed, how firewalls factor into it, the software required for a computer to actually become a web server, and languages that could be used to generate web pages for viewing.

Over the last 20 years, Matt has worked with an array of languages and tools. Today, for servers, his preferred tech stack involves a Linux-based operating system (usually Debian) with a containerisation platform (such as Docker) managing services on that host, using Ansible to configure groups of servers at once. He also reaches for bash when shell scripting is required, as well as PowerShell if Windows or Microsoft Azure is involved.

When it comes down to creating websites themselves, his main go-to language is PHP 8, utilising the Symfony and Laravel frameworks. He also reaches for Node (JavaScript/TypeScript) as needed, and uses MySQL/PostgreSQL as a data store/source of truth for applications.

His most recent role before starting the E2E journey began in 2019, when a local business search startup employed him as the administrator of their servers and Office platform, as well as one of the developers of their website/app.

Finally, in April 2020, Matt teamed up with Michael to found E2E Studios, each confident in the others’ ability to produce work that clients could be proud of.

What does Matt do at E2E Studios?